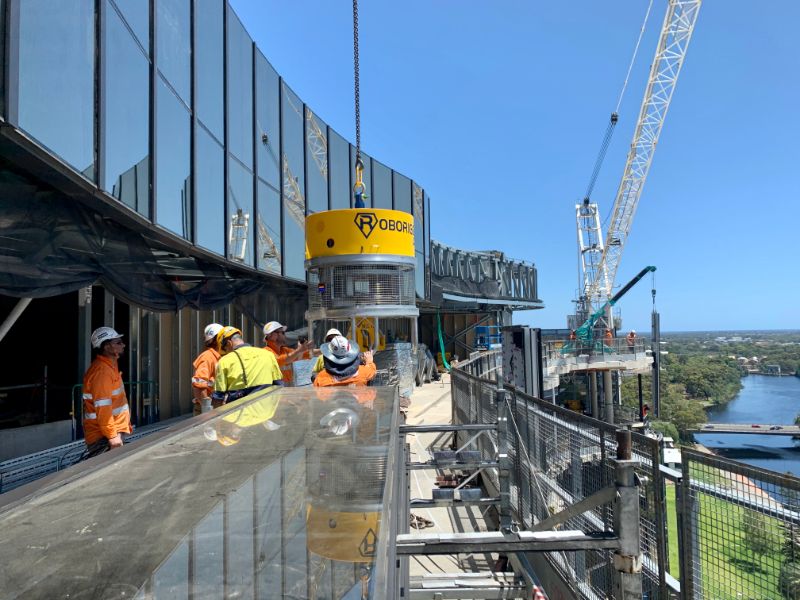 Load 28 trialled the use of RoboRigger, to assist with the management of wind for Facade install on the Skycity Adelaide Project. RoboRigger was trialled by our trained operator Aaron Sheppard, who displayed the unit and further trained the tower crane riggers and L28/AGI Facade Install Crew on its use.

During the Facade Installation on the upper floors of the SkyCity project, we have been hampered by unusual weather conditions this year. One of our biggest challenges is WIND. Over the past few days we have lost many hours due to wind.

For the L28/AGI Install and Tower Crane Crew, its the unpredictability that causes doubt and concern when preparing to lift facade panels… and when not to lift. Understandably this cause delay’s waiting for a stable measurement of wind to appear.

We are not talking big wind gusts here, a simply gentle fluctuating breeze causes an uncontrollable panel that is unable to be held by tags lines due to the building structure.

So Load 28 set out to find a solution, that could help control the unpredictability of wind, and install some confidence in the Tower Crane crew and install crew that this could be managed safely.

Load 28 recruited the help of RoboRigger to assist with the management of ‘unpredictable wind’. Our trained operator, spent the day on the site, working with the Tower Crane crew and L28/AGI install crew to induct them into the equipment; training them on start up, operation, calibration and shutdown.

The RoboRigger allows us to pick up the panel, and using it’s stabilisation technology, RoboRigger not only controlled the panel from twisting in the wind, but also controlled the ‘pendulum’ effect we often experience. Using the remote control, the Tower Crane Rigger was able to adjust the position of the panel as it came over the building to ensure it faced the correct way for install.

No more tag lines getting stuck in structural steelwork!

RoboRigger also has the ability to measure and log GPS locations/Windspeed/Weight and camera recording. The unit was well received by both the Tower Crane crew and Install Crew, and noted by the site team and Load 28/AGI that the unit will enhance safety and productivity.